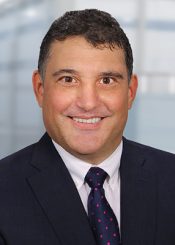 Domenick D’Angelica is Senior Counsel with Hickey Smith Dodd LLP and has been practicing law in New York for over thirty years.

Domenick is an insurance defense industry veteran.  He began his career in 1989 and, for the next 15 years, worked as in-house counsel for Hanover Insurance Company and then with Fireman’s Fund Insurance Company as a trial attorney defending personal injury and major property damage lawsuits. Domenick was then of Counsel to Wilson, Elser, Moskowitz, Edelman & Dicker where he tried many cases to verdict.

In 2008, Domenick was appointed as the Attorney of Record for the New York Liquidation Bureau, to carry out the responsibilities of the New York State Superintendent of Financial Services as Receiver. In this role, he was responsible for protecting the interests of the policyholders of insurance companies that have been declared impaired or insolvent. Domenick continued to practice law while he managed a staff of trial attorneys. He was also a member of various committees involving major losses.

Having worked in the industry as an in-house counsel, law firm litigator and government, Domenick brings a wealth of knowledge and understanding to Hickey Smith Dodd.

Domenick has extensive experience defending personal injury lawsuits involving both personal and commercial lines, and also has experience in the areas of medical and professional malpractice. He has represented a wide range of business entities, including commercial property owners, property management groups, general and subcontractors in the construction industry, hospitals, manufacturers, and restaurants and bars, as well as individual property owners and drivers.